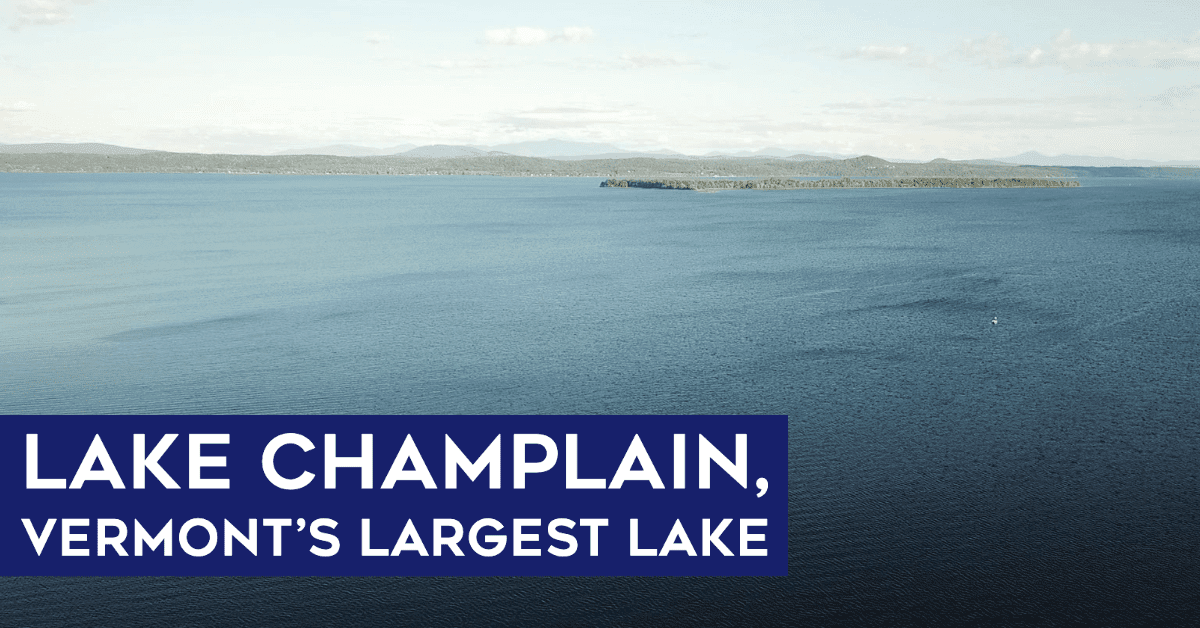 Are you curious to know more about Vermont’s largest lake, Lake Champlain? At Coldwell Banker Islands Realty we breathe the Lake Champlain lifestyle and are here to share more information about the beautiful Lake Champlain region. Discover how the lake got its name, battles that took place on it, how many islands it contains, and some other interesting facts.

Home to the oldest reef in the world, Lake Champlain is full of history. The Chazy Reef is a fossil reef located in Isle La Motte, Vermont that spans across 1,567 acres and is over 480 million years old. This National Natural Landmark is viewable to the public at the Goodsell Ridge Fossil Preserve and the Fisk Quarry Reserve.

Lake Champlain was first discovered in 1609 by French explorer Samuel De Champlain, hence the name, but there are also records of multiple names given by indigenous tribes such as the Iroquois and Abenaki.

Throughout the next couple of hundred years, the lake was a vital part in many battles and wars. During the Revolutionary War, Lake Champlain played a key part in shipbuilding, colony movement, and naval battles. The Battle of Lake Champlain, also known as the Battle of Plattsburgh, took place during the War of 1812 and prevented the British from invading New York. This battle was quite significant as it stopped the last invasion of the northern states by the British.

Shipwrecks dating back to the 18th century can be found in Lake Champlain. During diving season you can even go down and see some of them through the Vermont Underwater Historic Preserves.

Lake Champlain is about 120 miles long and 12 miles in width at its widest point. Even though the average depth is 64ft, the deepest point reaches down to 400ft. There are 71 islands throughout Lake Champlain. These range from tiny remote islands to larger islands with towns and full-time residents. Three of them are state parks: Knight, Woods, and Burton Island. There are also vacation rental opportunities out on Butler Island. The three largest islands are towns that include: South Hero/Grand Isle, North Hero, and Isle La Motte. Approximately 200,000 people use Lake Champlain as their home’s water source.

Over 90 species of fish live in the waters of Lake Champlain. It’s considered a frontline fishery for two species in particular: salmonid species (lake trout and salmon) and bass. Bassmaster magazine even named Lake Champlain the fourth best lake in the region for fishing in 2021!

There are over 318 bird species that live near or around Lake Champlain! The second most productive waterfowl site in the state is located right in the marshes around The Sandbar Causeway.

Another form of life is believed to live beneath the surface of Lake Champlain. The mythical lake monster, Champ, is a creature similar to the Loch Ness Monster that some believe is living in the depths of the waters. There are reports of Champ sightings as early as the 17th century.

Lake Champlain continues to play an important role in travel for everyone. There are two ferries that travel year-round between New York and Vermont making it easy to commute for recreational or work purposes.

In 2022, Burlington welcomed back a commuter rail service between Burlington and New York City. The Burlington Union Station is located right on Main Street. The Rutland-Canadian Railroad ended its use in 1962 and was developed into a public trail for bicyclists and pedestrians. The trail runs along the shores of Lake Champlain offering a unique recreational experience.

You can easily travel to the Lake Champlain Islands by way of the causeway that connects the Vermont mainland to the island of South Hero. There are bridges that connect each Island town as well as to Swanton and New York State.

You've heard of the five Great Lakes of North America, but did you know there used to be a sixth? On March 6th, 1998, Lake Champlain was declared the sixth Great Lake by President Clinton. Despite the bill being signed, the title for Lake Champlain didn’t last long. A lot of the country ended up disagreeing with the decision and wanted the status rescinded. So, only a couple weeks later, on March 24th, 1998, President Clinton did as the public wished and Lake Champlain was no longer a Great Lake. Even though it’s not official anymore, the nickname of the “Sixth Great Lake” has stuck with the lake.

Lake Champlain is full of history, life, and adventure. It lives up to its name of the “Sixth Great Lake” and is full of potential for you, your friends, and your family to have endless days of enjoyment. If you would like to learn more about life on Lake Champlain our Realtors are here to help.